This week on Painting Table Tuesdays, a little from column A and a little from column B.
First up, a return to my beloved Retribution mage hunter strike force (Privateer Press).  Still finishing up the base coats.  Generally, I paint models individually.  MHSF models are covered in fine details (chain, leather, and plate armor, two kinds of cloth, buckles, wooden crossbows, metallic swords, faces, and hair.  Quite a lot of fine work.  To save paint and (try to) maintain consistency, it seemed time to try an assembly line.  So far, I can say it is unsatisfying to still have eleven unfinished models, but very satisfying to see them coming together. 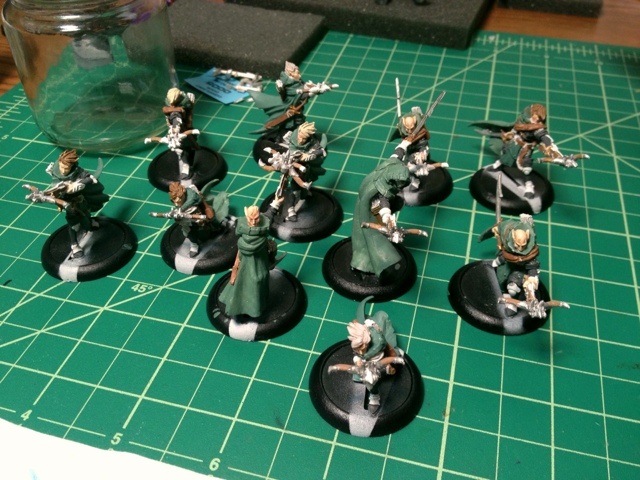 Also starting an Oniwaban (Corvus Belli) master ninja for my Yu Jing campaign army.  The studio models use a beautiful black-on-black and neon green scheme, but I wanted him to match my existing red/white, black, and olive drab army.  Just base coating and one level of highlight on the hakama so far. 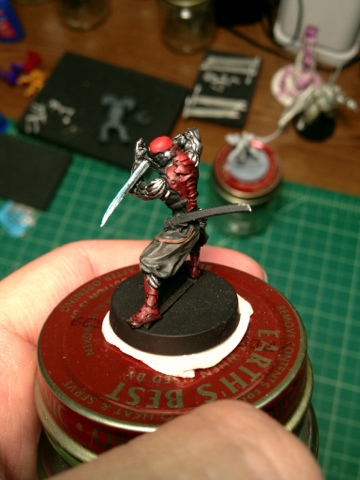 Our club wrapped up its Umbra league a few weeks back and I was able to catch a quick game.  Turned out to be a fairly one-sided match versus Monte and the infamous Borka Kegslayer, Most Difficult Warlock To Kill In The Whole Game.  Or, at least I think that's his title.  Seeing him, I insisted on scenario.

Monte deployed his entire collection of trolls.  I am not any kind of expert on trolls, but I suspect this may not have been Borka's finest list.  Borka an the beasts deployed in a clump slightly left of center and the fennblades and posse deployed right of center so the groups were about a foot apart.

Rahn's feat was devastating, allowing Rahn and the battlemages to pull all four warbeasts close enough for phoenix and sentinel charges, who were then controlling the central and left-most objectives.  The fennblades spent several turns trying to crunch through battlemages to get to Rahn -- and they would have -- but Retribution had won on scenario before then.

Not one attack was made against Borka.

Posted by Unknown at 3:57 PM No comments:

Chad has been vacuumed into the increasingly powerful Infinity phenomenon, picking up a small Haqq'islam force.  We played back on 12 December, 2012 and I recorded our lists, and the briefest outline of our game.  Calling it a BatRep is entirely unwarranted.


And I took a simple Japanese sectorial army built on link teams and the frenzy mechanic.

Saladin was able to stave off the ninja by blasting him through the terrain with a nanopulser.  Lasiqs were picked off early by AROs as they tried to climb terrain into advantageous spots.  On the other side of the board, the janissary and odalisque took advantage of a long fire lane to pin down and slowly eliminate my entire army.  Keisotsu simple could not deal with medium and heavy armor in cover at range.  I unfortunately was unable to test drive the domaru link team, as one fell early while advancing to odalisque ARO.  Must remember to try this again.
Posted by Unknown at 3:40 PM No comments:

Invasion of the MDF terrain!

Getting closer to a proper 4x4 table of terrain.  A couple more buildings, some trucks, and some consoles should finish it — and something to cover the teal tablecloth.  This table is built with Micro Art Studios District 5 apartment buildings and towers; Warsen.al large shipping containers (and a torii archway); Pegasus Hobbies pre-painted sandbag and loose stone walls; and an orphaned AT-43 vehicle.

Steve and I setup to play a game this Saturday morning.  I should have seen it coming.

Retribution won the roll and advanced.  Khador advanced.  Conquest fired at one phoenix doing six boxes and killing a nearby soulless escort, then setup a line of AoE and clouds across the board between our armies.

Dawnguard advanced with their vengeance move.  Rahn used Telekinesis to move both phoenixes forward, then tried to use it a third time to move a phoenix again.  Whoops!  That's illegal.  One advanced to combust and clear out the kayazy.  I misjudged the distance and only got three.  The other advanced to combust and clear out the great bears, but because I needed the second Telekinesis, he was short and missed all his attacks, leaving him two inches from the bears and five inches from Conquest.  Looked at the board… saw what was coming… saw no way out of it... and scooped.  The end.

Steve generously spent the next half hour talking through alternatives plans and how that might have affected the remainder of the game.  He strongly recommended I should have used the dawnguard's vengeance plus run to have them engage the kayazy, tying them up for a turn, and sacrificed one phoenix to the great bears to draw them out of position so I could kill them the next turn.  These still don't sound like very good options.  The battle is still replaying in my head, looking for alternatives.

Lessons learned: Telekinesis can only only affect a model once per turn.  And I need a serious revamp in my lists to deal with kayazy and underboss.

Tuesday, Maz and I played a 35-point Warmachine game with the Longest Night scenario rules.  We missed out running this last year and he might before Halloween seemed a perfect encore.

Maz has been switching over to Magnus lists, beefing out a mercenaries army.  I somehow have never played against mercenaries and have only seen them (beyond admiring the models) once when a nearby tournament player experienced Gorten's Landslide feat for the first time.  A few pirate-y words were uttered.  But today we did not face Gorten; this was Magnus, bane of Cygnar!

Serious players will no doubt notice several problems with this list.  First, no mercenary contract allows Horgenhold Forge Guard to be taken with Magnus1.  The will only work with Cygnar, the Protectorate or Searforge contract.  However, Magnus' Four Star contract only allows models that work for Khador or Cryx.

Furthermore, we didn't realize until I started writing this battle report that he was running six points down.  But, more on this later.

(Getting close to my goal.  This list is almost fully painted.  One unit of battle mages to go!)

The Mercenaries won the roll and opted to go first.  He setup the forge guard on his extreme right flank with Rhupert and the rest of his force on the extreme left.  Facing a (generally) slow Rhulic force with a (generally) quick Iosan force, a denied flank setup was obvious.  Rahn's models setup far right, directly across from Magnus and the warjacks.  It would take the forge guard three or four turns to arrive -- assuming they could get past the thralls spawning from the tents.


And that's exactly what happened.  Maz played ten points short (for the mispositioned forge guard) and another six point short for using a list builder that didn't remind him about warjack points.  It was a rout.

Maz built his list with Privateer Press' new War Room application and it was a severe disservice.  As a relatively new mercenaries faction player, he was not intimately familiar with the contract requirements of his caster and units and War Room did nothing to remind him of those limitations.  It silently allowed him to create and use an illegal list.  Furthermore it did not remind him that his list was incomplete.  It blithely displayed "35 points" where it could have displayed "35/41 points".  Bad experience for Maz; bad experience for me.  Bad for the game.

For these and many other reasons: Don't use War Room.  Don't allow your opponents to use it.  Don't give Privateer Press or Tinkerhouse Games any money for it.  You will only encourage them.

Lessons learned?  Not many.  It wasn't that sort of game.  Battle mages towing enemy warjacks into melee range of a focus-charged, concentrated power phoenix is lovely to behold.  MacNaile's artillerist power with the renegades is a nasty trick, but only once per warjack and it's nicely negated by Rahn's force field spell and the battle mages' inherent blast immunity.  Pretty straightforward and short game.

Hope to try this again sometime.  Maz is always a pleasure to play with, and mercenaries are a fascinatingly fresh opponent.

Posted by Unknown at 3:01 PM No comments: